The summer of 2017 saw The Programme of Armenian Studies deliver its fourth consecutive Summer Intensive Courses in Western Armenian over a three-month period. Year after year we see proof that there is interest in the Western Armenian language. Individuals apply for the course for a variety of reasons, whether personal, academic, cultural or otherwise. This year, once again, we welcomed a diverse range of students from different backgrounds. These courses are designed and taught by Dr Krikor Moskofian.

It should be noted, however, that for the first time, many of our applicants were unable to travel to the UK to attend the course due to visa issues. This unfortunate state of affairs has led the Programme of Armenian Studies to moot over the possibility of moving the Summer Intensive Courses the following year to a location that would be more accessible to our potential applicants. We have now decided, in cooperation with Pázmány Péter Catholic University, to hold the Summer Intensive Courses in Budapest in June, July and August.

Lessons for the elementary class were held in July and lasted 5 hours 15 minutes per day, excluding two breaks. The elementary class taught the foundations of the Western Armenian language. The students began by learning the Armenian alphabet, then moving on to grammatical themes, studying simple tenses, verb conjugation and noun declension. 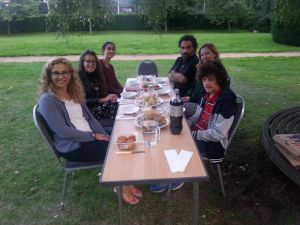 The intermediate class was held in August. Lessons for the intermediate class have been catered to be a natural progression from the elementary. Students were exposed to a great variety of tenses and intricacies of the Western Armenian language. They were constantly given homework, which was checked by the teacher the day after. The students were directly exposed to the Western Armenian language through cultural products such as Armenian songs and films. Each student was also tasked to give a presentation on a topic of their choice.

The advanced class took place in June. Our student achieved a marked fluency by the end of the advanced course. He can now engage with both the conversational and formal forms of Western Armenian.

Aside from the linguistic aspects of the course, students of the elementary and intermediate classes were given lectures on a broad range of topics connected to Armenian culture, society and history. The following list of lectures were presented by our esteemed guest lecturers: 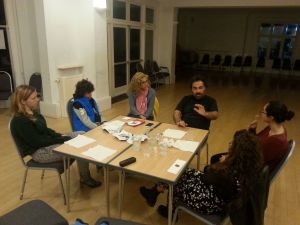 Students had coffee breaks in between lessons. This provided them the opportunity to discuss a variety of interesting personal, cultural and political topics related to their experiences and academic work. They shared their reasons and motivations for taking up Western Armenian. These discussions were extended during two dinners held at the start and end of the courses respectively. In addition, the Society of Western Armenian Speakers met twice throughout the courses. Students and members of the Armenian public joined to speak and practise Western Armenian in a relaxed and amicable atmosphere.

Participants of this year’s Summer Intensive Courses all noted that they have felt a marked improvement in their Western Armenian and are more than pleased with the progress that they made. The intensive nature of each course allowed students to be exposed to the language every single day in both an academic and friendly atmosphere. The Programme of Armenian Studies wishes all the best to its students from this year and looks forwarding to welcoming more in the summer of 2018.